Click on Executive Summary, Table of Contents or IMEX Research for additional information on report.

The rapid explosion of digital data catalyzed by the pervasiveness of the Internet and massive growth of a variety of computing devices has created a new market for capturing and analyzing non-traditional unstructured and machine generated data. The vast majority of data growth is coming in the form of data sets that are not well suited for traditional relational database vendors like Oracle. Not only is the data too unstructured and/or too voluminous for a traditional RDBMS, the software and hardware costs required to crunch through these new data sets using traditional RDBMS technology are prohibitive. To capitalize on the Big Data trend, a new breed of Big Data companies have emerged that are leveraging commodity hardware and open source software technologies from data capture, operational integration, advanced analytics to visualization from these new data sets IMEX Research believes that some leading incumbent vendors are unlikely to be a major force in the new Big Data era, not so much because of a lack of technical know-how but primarily due to their inability to cope with pricing issues. Using current Oracle pricing models, we estimate Oracle pricing would be about 9x more than average of the Big Data vendors to solve similar problems. As corporate data sets grow, we are skeptical that Oracle could retain its pricing power with a blended database offering of traditional and Big Data solutions if it were to compete against the Big Data players, despite a positive short term boost from moving to an integrated SQL Appliances like Exadata/Exalogic/Exalytics.

While most people would think of Google, Facebook as Media companies. In reality they are a myriad of other high growth internet oriented companies are Big Data companies because their businesses have been created due to their ability to harness Big Data (e.g. Big Table from Google). 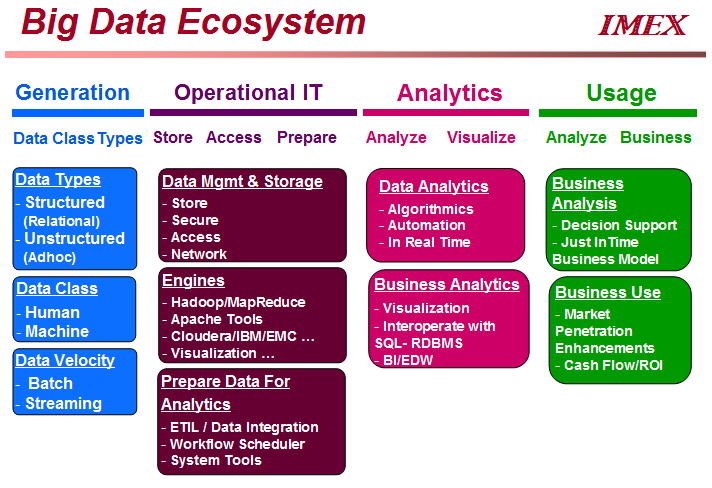 If RDBMS Could Handle Big Data Volumes, Why Bother?

IMEX Research believes that the economics inherent in using open source big data software running on commodity hardware will drive companies to consider these next generation systems when implementing new systems for new non transactional workloads. This is despite of being faced with the concomitant cost of developing expertise in the emerging alternatives. To illustrate this cost discrepancy in achieving high-performance solutions being provided today by traditional database vendors vs. the price points solutions put together using open source software and commodity hardware by the new generation big data vendors, three separate use cases illustrate the savings that are easily achieved as shown in the diagram as follows: (For details see chapter 3 of this report) 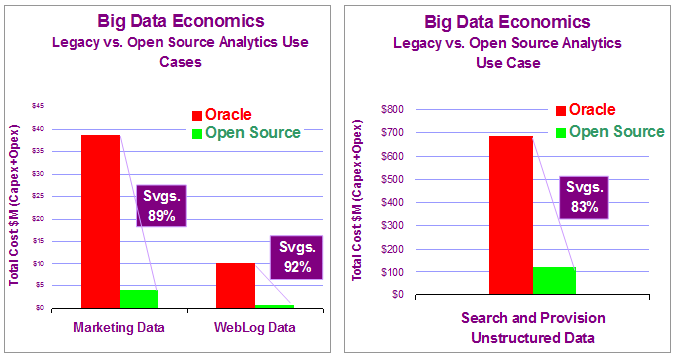 Hadoop isn’t the only thing going in big data, but it’s driving the bus at this point and it seems to have a Midas touch: everything that touches it turns to gold. Hadoop-based startups have raised $104.5 million since May 2011. This is over and above $159.7 million raised since 2009 till May 2011 when Cloudera closed its first round. These totals don’t include the recent or unattributed rounds for Odiago, high investment for Yahoo spinoff Hortonworks (now adopted by Microsoft). In addition the NoSQL in their focus on unstructured data, also have announced just more than $90 million in funding overall. Not counted in the above numbers are:
- Opera solutions $84M (Silverlake, JGE, Accel, KKR, Tola Capital)
- Infineta $15M (Rembrandt Venture Partners, Alloy Ventures, North Bridge Venture Partners)
- Xignite $10M (StarVest Partners, Spring Mountain Capital)
- Platfora $5.7M (Andreessen Horowitz, In-Q-Tel) Never mind, the many analytic database vendors that play in the big data arena that have been acquired over the past couple years for billions in aggregate.

Although Hadoop initially has been used by large web companies such as Google, Yahoo, Facebook for applications such as search engines, but its potential is much, much more.

The Big Data 2011 Industry Report report details what Hadoop is (and isn’t), brings into focus the key technologies and their interplay, provides a perspectives on different players, who’s doing what to productize them and how they fit into the ecosystem. It profiles the growing number of companies — from startups like MapR to Cloudera, the present leader in the space leveraging Hadoop plus 52 others – both announced and in stealth, to the strategies being adopted by Relational Database/Data Warehousing/ Business Intelligence/Data Integration incumbents like Oracle, IBM, Microsoft, SAP, Teradata, SAS, Microstrategy etc. to embrace the emerging technologies while new Big Data Infrastructure entrants the likes of EMC, NetApp, Cisco, Dell, Fujitsu, HP, Adobe and scores of others planning new products to address this space. . It charts out the SWOT analysis of both leaders and new suppliers as well as their competitive positioning and strategies. The Big Data 2011 Industry Report by IMEX Research delineates the existing operational challenges businesses face and how enterprise IT leaders can harness the deeper insights provided by Big Data to manage complex operational problems and empowering businesses in knowledgeable decision-making to get the competitive advantage for their companies. It lays out the rapidly evolving big data business and technology ecosystem - different big data technologies from Hadoop and emerging NoSQL derivatives to cloud-based collaboration tools. 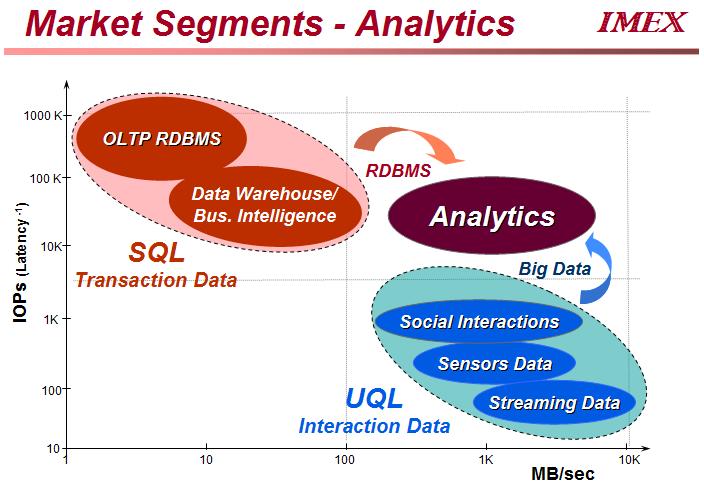 Further, the report outlines how the market opportunities in Big Data are crystallizing to pick up serious steam while taking into account the challenges still hindering widespread adoption and where potential users can expect the market to go. It presents a 5 year market forecast 2010-15, market shares of leaders, likely M& A scenarios and examines go-to-market plans of leaders to provide big data solutions for several vertical industries such as financial services, healthcare and media. Finally it provides recommendation for vendors, channel players, end users and investors for timely play to leverage the opportunities presented by the emerging big data markets.